skip to main | skip to sidebar

It's 636 curves in 22 miles when you ride the "Tail of the Dragon" both ways -- and that's what I did today. The "Dragon," (aka: Deals Gap) is in the heart of the Smoky Mountains and is a worldwide destination road for motorcycle and sports car enthusiasts. It's a destination that I have read about regularly in motorcycle publications, so I was excited for the opportunity to ride it.

I was awake to watch the dawn arrive -- and shrugged in disappointment as I noticed the low hanging fog. I decided to slow my departure and continue on my original routing to the "Dragon." As I loaded up the bike, I visited with several other riders who had stayed at the motel and who ride the area frequently. They noted that the area fog, that is the "smoky" part of the Smoky Mountains," was common and there was no predicting when or if it would lift. Sure enough, as we loaded our bikes, the fog began lifting. My hopes for riding "The Dragon" were resuscitated.

The next obstacle was about 10 miles from the motel on a mountain road. I came around one corner to find this: 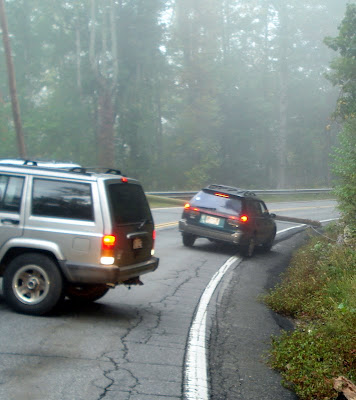 My instant reaction was renewed disappointment in yet another obstacle. But the disappointment didn't last long as I discovered another route to my destination (thanks to the GPS and some lucky guessing).

Thereafter, getting to "Tail" part of "The Dragon" was on such a fantastically fun route that I actually thought I had "done" the "Tail" when I arrived at the starting point. And, by the time I got there, the day had become a beautiful, sunny 65 degrees with beautiful autumn leaves falling in my path.

After a little conversation with some other bikers, I headed out. The ride was exciting as the tight corners required my undivided attention. Now I personally understood why the road was famous -- and how some riders have made it infamous (in my motel room tonight I learned from a news report that the 5th rider death this year on the "Tail" occurred today from injuries in an August accident.)

The end of the "Tail" came so quickly that I decided to turn around and take it back -- after all, I still needed to pick up a trophy T-shirt, patch and photo! 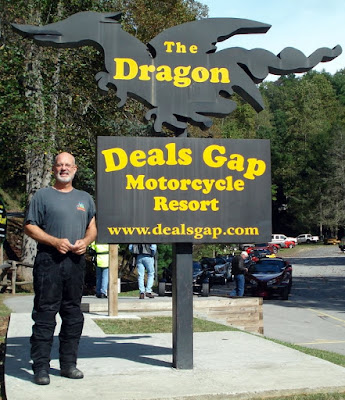 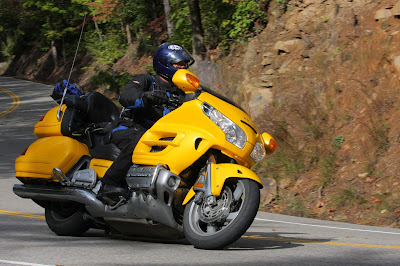 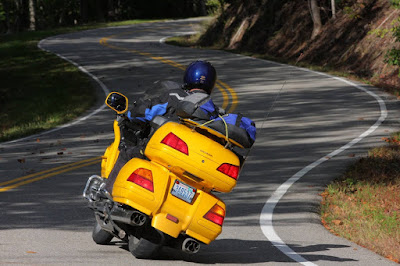 The ride back was equally exhilarating but also more complicated as there was more car and bike traffic -- including about two dozen Plymouth Prowler roadsters like this one I took a picture with. 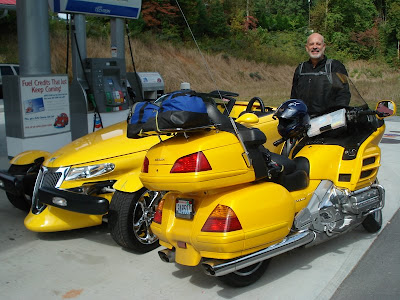 After the "Tail," I proceeded over a nearby, well-regarded, often-written-about scenic road called "The Cherohaha Skyway." The Skyway climbed high into the Smoky Mountains with spectacular vistas on a roadway that was actually more to my liking than the "Tail" -- sweeping curves rather than short, tight ones. 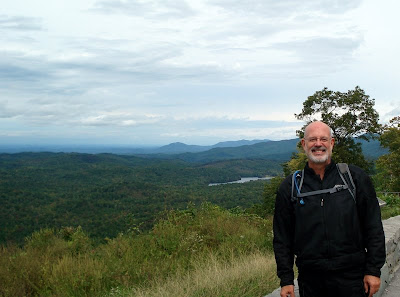 I've included below my actual GPS track of the Dragon and the Skyway. You may notice the "head" of the dragon where the yellow track starts on the far right. The "tail" is the point at the center top of the image and the Skyway is the long track that ends on the far left.

At the end of the Skyway I happened upon a beautiful, inexpensive creek-side cabin in Tellico Plains, TN where I relaxed my sore muscles. The news reports that I may well be riding in rain tomorrow on my way through Tennessee -- but I'll do so knowing that today I was blessed with perfect riding conditions and fantastic roads. I am already looking forward to reading future magazine articles about this motorcyclists' paradise with a certain smug satisfaction.