skip to main | skip to sidebar

Click here for larger image
Just outside the ho-hum town of Blanding, UT, I picked up Highway 95 (known as the Bicentennial Highway) through the Glen Canyon National Recreation Area expecting it to be just another "scenic" desert pathway. I couldn't have been more wrong. Immediately I was on wonderfully curvy canyons between dramatic cliffs and crevices that evidenced the power of water over millions of years. Pictures will never do justice to the magnitude of the beauty that surrounded me on this route but it gave the feeling that I was in a video game on a roadway near the bottom of the Grand Canyon.
Several times I stopped the bike to take in the vistas -- and the only sounds were a few birds in the otherwise silence of these red-rock canyons being illuminated by the dawning sun against a bright blue sky. The ride had a truly magical feeling with a perfect mix of exciting curves and enjoyable straight-a-ways. In the 133 miles (about 3 hours with my stops) to Hanksville, I did not see one vehicle going the same direction I was going -- and only a few traveling the other way.
The route crosses the Colorado River at the point that the man-made Lake Powell begins, and since I had never seen Lake Powell before, it too was a treat of beauty along the way.
After a fun, conversation filled breakfast in Hanksville, I turned first on Highway 24 and then Highway 12 which collectively National Geographic calls "Scenic Byway 12." First off -- the route needs a better name like "Tail of the Rattler" or some such catchy slogan. But what may be lacking in its name is definitely made up for in its beauty. I've included a map of the entire route(above), but this part of the route traverses the Capitol Reef National Park, the Dixie National Forest, the Grand Staircase-Escalante National Monument and Bryce Canyon National Park. National Geographic gets it right when it says "this highway snakes along narrow ridgetops, carves through red-rock canyons...ascends 11,000 foot Boulder Mountain for breathtaking views."
Again I was treated to a general absence of other vehicles and landscape that included the bright yellows that can be seen in earlier pictures I've posted. I could go on and on -- but you get the picture -- I loved this route and, as previously mentioned, believe it to be the most fantastic of the entire journey. Is it just because it is the most recent beautiful ride? Perhaps. Is it because I caught it on a day when motorhomes and other tourists didn't plug the route? Certainly. Is it because it was a crisp October day with the leaves in the peak of their brilliant yellows? Of course. All the right reasons came together today and made for a wonderful day. My only disappointments would be (1) that Deb wasn't along to share it with and (2) Utah uses tar stripes to patch it's roadways and these tar "snakes" can be treacherously slippery to motorcycles -- keeping me slightly more tentative/cautious than usual. The first one is easily fixed -- I'm already thinking about when I can bring Deb back. As for the tar -- well, maybe it's a good thing that something slowed me down a little.
I guess I should also mention that I'm aware that I didn't even get to see ALL the scenic beauty this area of Utah has to offer in that I didn't even make it to the Moab area that includes the Arches and Canyonlands National Parks. Of course I'm adding those roads to the bucket list as well!
I treated myself to a nice motel in Panguitch, UT and briefly thought about doing the same route in reverse the next day -- but, alas, I'm starting to feel the common homing instinct that often sets in towards the end of a trip. John Steinbeck's words (that I quoted at the beginning of this blog) are even more true now: "... my warm bed and comfortable house grew increasingly desireable and my dear wife incalculably precious..."
Tomorrow my planned route includes Nevada's "The Loneliest Road in America." We'll see whether that road lives up to its name -- but for now I'm renaming today's "Scenic Byway 12" as the "Best Ride Of This Trip." 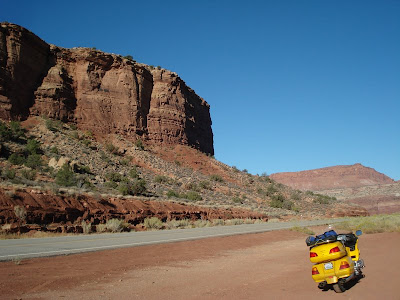 This is the only picture I'm going to post -- just as token reminder of the day. None that I took truly show magnificence of the day's ride.
Posted by Noel at 6:21 PM